Posted on February 4, 2015 by TraderHank

I woke up this morning with two stocks on my earnings watch which were DIS and GILD. DIS scored as a Tier III gap but GILD was a Tier II and if the market was gaping up, which it was not, it would have been a Tier I gap, the best! Well, price action sold off hard at the opening in GILD confirming that sentiment felt it was a Tier I gap which allows for an immediate entry and those who were brave and entered were rewarded handsomely. I waited until the first PSS which did not have enough risk to reward for me, so I passed on the trade. Good thing, price action rolled back upward and continued higher. Soon a small little Doji bar appeared near the 40/60% Fib retracement area. I had a nice 3-1 risk back down to the low and this setup was pretty much everything that I was looking for so as it triggered I was in short at 97.31. It took about 45 minutes of SOH (Setting on Hands) but price finally made it down to my 3 “R” (Risk) unit target where I covered all at $96.14. Believe me, it’s hard just to set there and watch as I thought many of times in this play, that I was going to take a full stop out. Hurray, my patience was rewarded this morning handsomely! 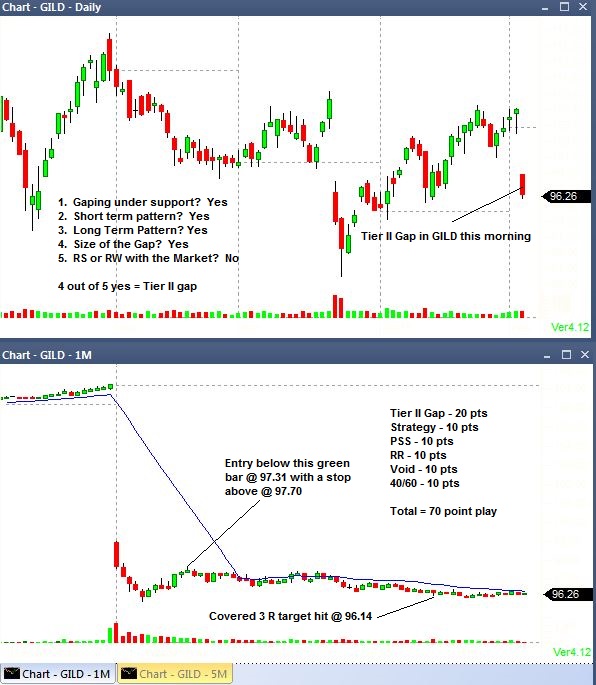 This entry was posted in Gap plays and tagged Gap play, GILD. Bookmark the permalink.

3 Responses to Masterful play in GILD